We have sifted through the vast amount of Game of Thrones drinking horns available online today and present you with the best of the best below.

Most products are available for delivery in over 100 countries.

Positive customer feedback on every product for total satisfaction.

A Collectors Must Have Products

Inspired by Game of Thrones this unique drinking horn mug is engraved with this slogan on one side and a House of Lannister Lion symbol on the other side. Click the image to see more photos of this genuine drinking horn mug.

As each piece is unique, each mug holds between 18 to 25 ounces, depending on their size which can range from 4.5 to 6 inches in diameter.

These make the perfect gift for any Game of Thrones fan, or whoever wants their drinking vessel to make a statement for them.

The King of The North Drinking Horn

With a capacity of 300mL, this carefully engraved drinking horn is a must for any Game of Thrones fan. Complete with brass trim, polished finish and a red leather holder you are sure to turn heads with this collectable.

Perfect for parties, medieval gatherings, weddings, or just for adding to your GOT collection. Become the King of the North and command respect.

To make this product even more enticing the seller offers a lifetime guarantee! So what are you waiting for? Order your now!

Become Your Game of Thrones Hero

Have you seen your Game of Thrones hero drink from a drinking horn? Now is the time that you can join them!

Throughout the show many different drinking vessels are used. We often see the wealthy characters such as Tyrion Lannister, Jon Snow and Daenerys Targaryen drink from a metallic cup to hold their wine or celebratory drink after a battle.

However in the bars and within the local communities, the commoners tend to drink from a drinking horn cup made from a bovine.

The rustic warriors such as Tormund a leader of the Free Folk from the “true” North would however drink from an extra large drinking horn, often spilling the beverage all over himself.

So why not treat yourself and grab a large or extra large horn to drink like a true warrior?

Alternatively, order yourself a standard sized tankard or traditional drinking horn. You may even choose a glass or plastic version for easier cleaning and more durability. 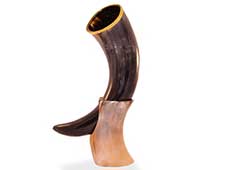 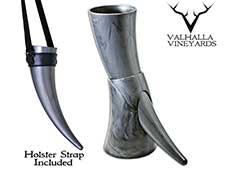